Sunday 7am we took off from Show Low to Bayfield CO (18 miles east of Durango). The trip was uneventful even though we did hit rain for about 10 minutes (just long enough to get the coach & Lincoln filthy) and took us only 5.5 hours. We arrived at Bayfield Riverside RV Park to find out that the person I spoke with to make the reservation (actually she had called me to say they had a cancellation and that they could fit us in) didn't put it down in their system, so there was no reservation. Luckily they just got a cancellation, so we got that spot. So all worked out. We are surrounded by trees with a little pond behind us with a creek running through the park. It's nice, but rustic.

Later on in the evening, the electric power went off in our coach. No one else in the park was having a problem, just us. Then the power came back on after about 1/2 hour or so. It kept doing this, but couldn't figure out what was happening. So just let it go until we could call Newell to figure this out.

Monday, we had reservations for the Durango/Silverton Train. Had to be at the train station at 8:15 am (7:15 am AZ time) to board. We purchased tickets for a parlor car (for 21 years & older) which happened to be the last car of the train. I won't bore you with all the pictures I took (185), but just give you a sample so you can hopefully get the idea of the beauty of this country.

Our parlor car only sat 24, which a couple of table were empty. Only problem with this car was trying to take pictures through the small windows. 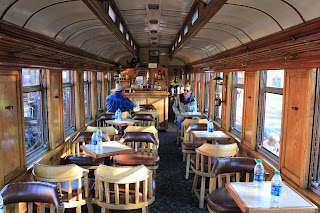 A view of our train as we rounded the cliffs. 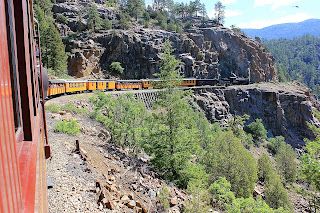 We followed the Animas River pretty much the whole route to Silverton. 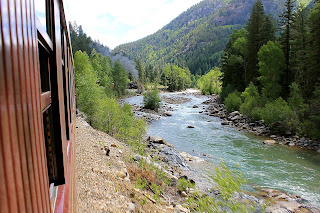 The scenery was spectacular. 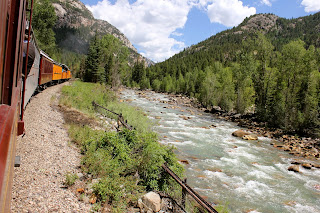 The trip up to Silverton takes 3 1/2 hours to go 45 miles. The train is all original steam engine on a narrow track, which means there's a lot of movement back and forth. It could lull you to sleep. 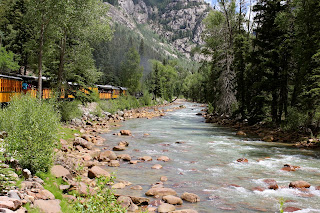 We went to Handlebars for lunch in Silverton. This was the most popular and best restaurant which we later found out. Our food was excellent after only about a 15 minute wait. The place was just packed. 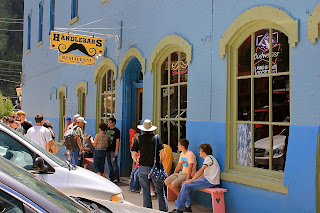 View of one the main street in Silverton. We had just beautiful weather, it was in the low 70s at 9300 feet elevation. The trip back on the train as we got to lower elevation got much warmer, in fact a little too warm on the train. 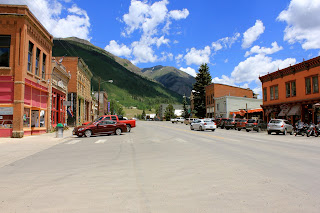 This is heading back after 2 hours in Silverton. The trip back to Durango also takes 3.5 hours. It just makes for a long day. We were exhausted when we got back even though we just sat for the past 10 hours. 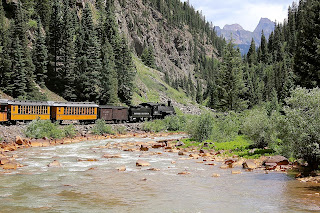 Jim enjoying the view from the rear of the parlor car. 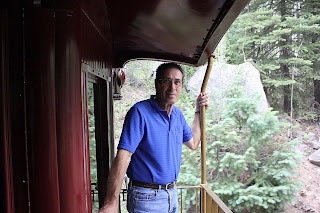 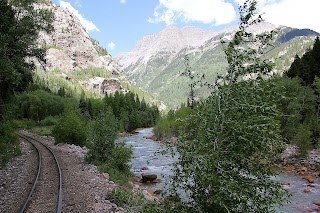 We got into Durango at 6pm and headed back to the RV. Hung out for a while then went to bed.

Tues. a.m. we called Newell to ask about our electrical power issue. They indicated that when your power source has a high fluctuation of amperage the surge/trans. box will shut off. He told us to run off the generator or we would burn up the box which costs $800. So the generator is running. We informed the park of the issue and they claim that their power source could not be the problem. How do you argue the issue? So we will just see at the next park if we have the same issue, then it's probably us.

We washed the RV and Lincoln this morning because you couldn't even see out the windows they were so dirty. Then we just took a drive around the area and ended up at 3 wineries, all were good and came back with new wines for our collection.

Don't know if we will leave a day early (tomorrow) for Albuquerque because of our power issue or wait till our planned day of departure on Thurs. Will see how it goes.
Posted by Moon Ventures at 5:05 PM