We got into Flagstaff about 6pm Friday after a 4 hour drive (it took a little bit longer because of Phoenix traffic). Checked into the Hilton Garden Inn, got settled into the room then took off for dinner at a new casino, Twin Arrows, about 20 miles east of Flagstaff. Had a great burger and a couple of beers at the sports bar there, then hit the slots for a couple of hours.

Sat. morning we were up bright and early looking for a diner on Route 66 and we came upon one which turned out to be a good choice, The Crown Railroad Cafe. 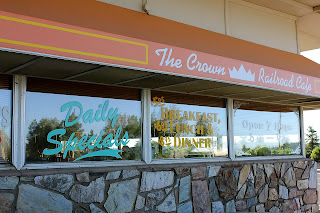 A model train made trips overhead as you enjoyed your food. 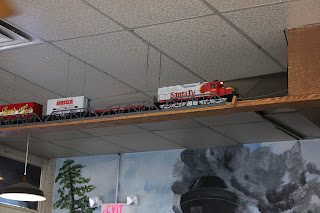 Lots of paraphernalia hanging on the walls and shelves in regards to Route 66 and railroads. 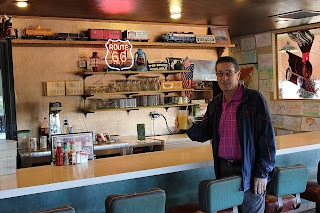 We both orders what we thought was normal breakfasts, but as you can see, they were designed for hearty eaters. 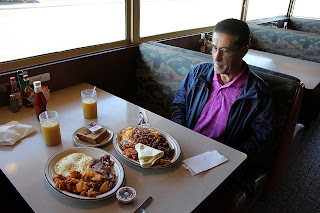 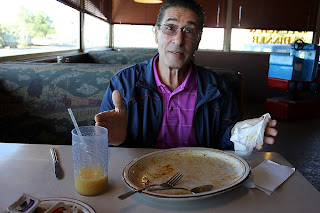 We were finished with breakfast before 8am, so we decided to go site seeing. Drove 15 miles east on Hwy 89 to Sunset Crater. 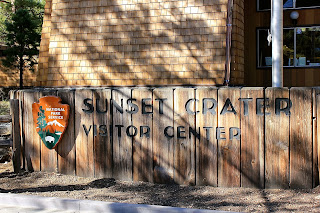 We were quite surprised to find lava (no we did not transport ourselves to Hawaii), in fact quite a bit of lava that came from the crater that erupted between 1040 and 1100. 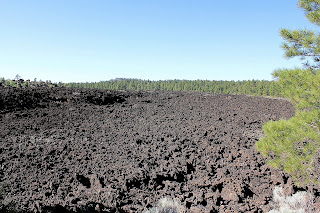 Here is the Sunset Crater, there were no roads up to the top, I believe there are trails that you can hike up there, but we didn't (actually we needed to after that big breakfast). 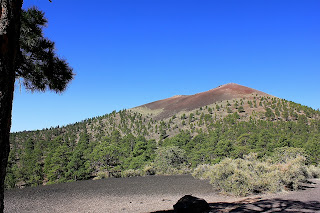 Continuing on the loop road, you run into Indian ruins. Here is the Wokoki pueblo. 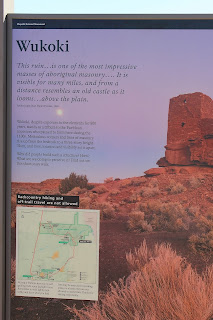 We took the short hike to climb this old pueblo. 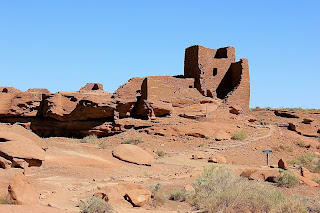 From atop the dwelling looking out. 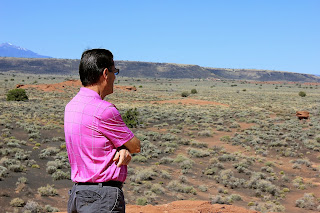 Next we drove to Walnut Canyon National Monument about 7 miles east of Flagstaff. Here there are many Indian cliff dwellings that you can hike to view and climb around inside the cliffs. The hike down was strenuous, using muscles you normally don't use. I believe it was about a 200 ft. drop, literally down the cliff. 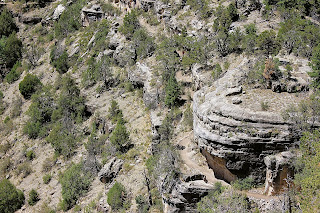 Jim pointing to the blacken top of inside the dwellings most likely from fires. 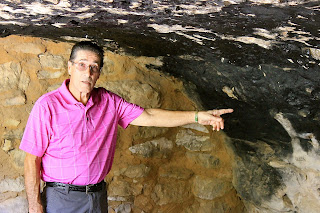 The trip up was much harder than going down (yes we burned off our breakfast calories). The ranger said there were about 240 steps with an elevation change of about 200 ft. Boy were the muscles burning and the heart pumping. We enjoyed many scenic stops along the way up the side of the mountain! 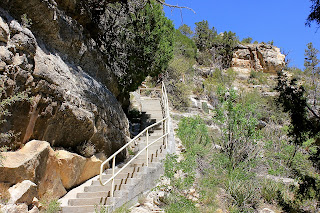 Next we went to Lowell Observatory. We looked through a special telescope to see the sun. It was a bright red ball and you could see solar flares that are actually higher that the earth is in diameter. 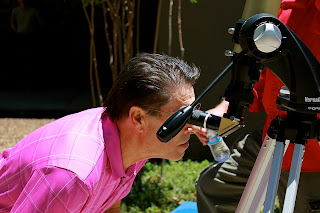 We went on the Mars Tour, which gave the history of the Lowell Observatory and we viewed the Clark Telescope which was built in 1896. In 1912, V.M. Slipher using this telescope discovered the first evidence of the expanding universe beyond the Milky Way galaxy. 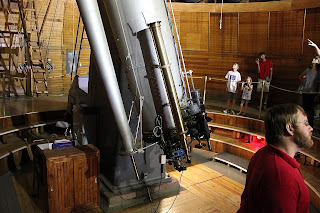 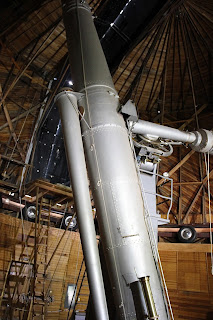 After our fill of education we needed to change gears and headed to the Wine and Food Festival.  We got there about 2:30 and most of the food vendors were out of food, the wine vendors were close to be out of wine. But we did get to do some wine tasting and had a couple pieces of pizza. The event was from noon until 5 so we thought getting there at 2:30 was a great time - but we learned - in Flagstaff you need to get there early if you want to taste all the vendor's fares. 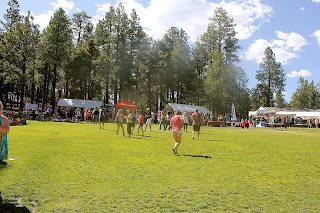 After about a little over an hour at the festival, we were ready to go back to the hotel and sit back and relax. We had an event filled day and our legs were hurting from that climb up the mountain. Ended up just walking across the street to Sizzler for dinner, then called it a night.

Sunday just packed up and headed home ahead of all the traffic. Now we are sitting at home enjoying the a/c while it is close to 100 degrees outside. All-in-all it was a fun quick trip. Didn't find much cooler weather, but was much more bearable than 100+ degrees here.
Posted by Moon Ventures at 1:32 PM