Finally I have a few minutes to write about our adventures in traveling 4 states in 2 days. We left Tucson on Thurs. morning, only about 1 hour later than planned because we discovered an engine coolant leak going into the Aqua Hot (hot water heater). After contacting Newell to find out how to solve the issue (by shutting off 2 valves), we were on our way East then North.

Our first stop was Albuquerque, where we arrived at 7pm, got set up and was enjoying a bit of relaxation after a 455 mile drive, when all of a sudden the power went out. At first we thought it was the park, but we discovered that we were the only ones without power. We had electrical problems with the our main power transfer box. So since it was quite hot, we turned on our generator so the A/C could run and had dinner and went to bed, to call Newell again in the morning to find out how to fix.

But by morning the power was working again, so we decided to head out at 6:15 am to head further North. But by the time we got about 10 miles we had to pull over to the side of the road 2 times to close a bay door (outside storage door). Finally we just took an exit for a frontage road and found all the bay doors were locked except the one that kept opening and we couldn't unlock them. So - called Newell again. After working on this issue for about 1/2 hour with Newell tech, a big truck with flashing lights pulled up behind us. New Mexico DOT have what they call Courtesy Patrol to help people that are broken down along side the road. He proceeded to help us solve the problem - replace one little 15amp fuse. The problem was we just couldn't get to it, but finally did. We are forever thankful for Everett Quintana the Courtesy Patrol Driver that helped us. What a great service.

Now we are finally on our way north I25, only 1 1/2 hours later. Our next stop - Cheyenne, WY a mere 562 miles. First off we ran into an accident that just happen on the Interstate, which slowed us down a bit. But after that it was clear sailing through Pueblo, CO, then we hit heavy traffic at Colorado Springs all the way through to Cheyenne. At Denver that traffic was stop and go way south of the city, so we took the express toll road all the way around the city. Traffic was light and we just sailed through the 45 mile bypass at a cost of approx $80-$100 toll fee. We won't know until we get it in the mail. They charge an arm and a leg for 5 axle vehicles.

We thought that getting north of Denver the traffic would lighten up - no way. It was still slow going and stopping at times until we pulled off at exit 2 in Wyoming. After 8 3/4 hours driving we were so happy to get to our destination, set up and pull out a bottle of wine to ease the stress.

Today, we walked around the Ranch then headed into Cheyenne to see what that was like. We are staying at the Terry Bison Ranch RV Park about 9 miles south of Cheyenne and it's a real working ranch with all the animals. 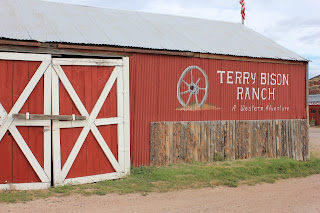 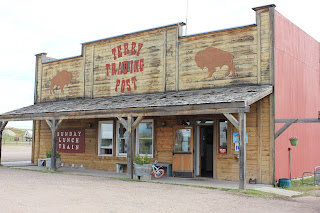 Jim talking with the little donkey. 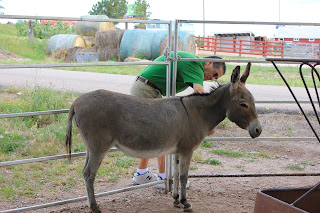 A face that a only a mother would love. 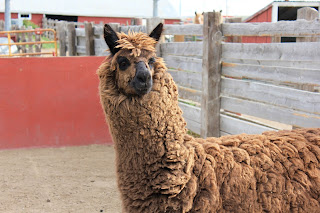 Jim had a real connection with the ostrich, in fact this ostrich is doing a dance for him where he (or she) squatted down and danced his (or her) feathers back and forth to each side. Don't know what it meant, but it was quite different. 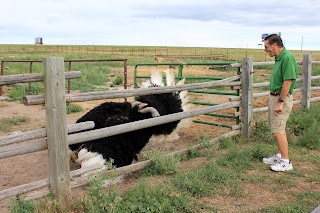 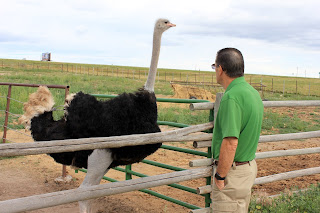 There are horses, pigs, goats, chickens and of course bison. The only way you can see the bison though is to take their train ride to go out in the fields, which we weren't going to pay $12 each just to see some bison, which we will see in Yellowstone.

The Ranch and RV Park are quite rustic and would not qualify to receive 5 stars, but everyone is friendly and it's quite different. 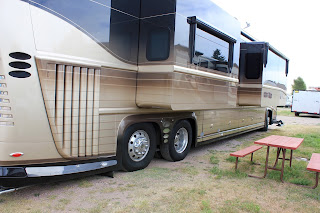 Went into old downtown Cheyenne and saw many old buildings. 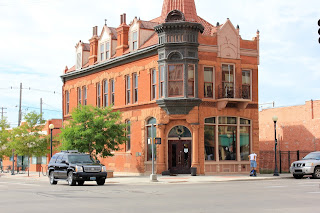 Went to the Railroad Depot Museum, which was quite informative. 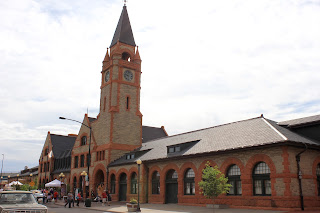 Walked around town (which after traveling for 2 days felt quite good), up to the State Capital building. 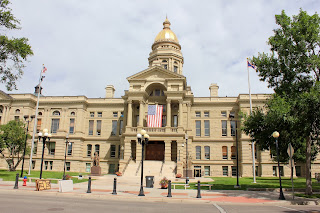 Then took a tour through the historical Governor's Mansion. 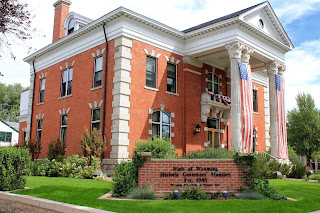 See the photo below this one to describe what the train engine is. 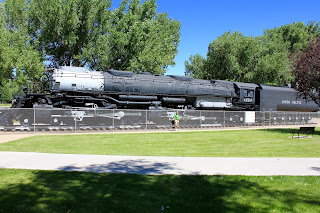 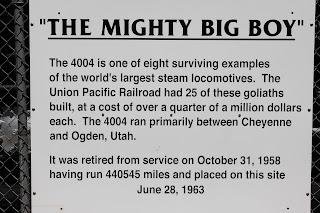 Not much else we could find to see in Cheyenne. It is the largest city in Wyoming at only about 62,000 population. Tonight we are headed over to the Senator's Steakhouse and Brass Buffalo Saloon (located here on the Ranch) for an authentic Bison Sirloin dinner. A must experience.

Tomorrow we head out early for a stopover at Billings, MT on our way to Yellowstone. Stay tuned for our continued saga.

Posted by Moon Ventures at 1:49 PM