Timely posting of this blog was delayed due to a technical oversight of our internet service parameters. Our internet service is through HughesNet through a MotoSat Satellite. Contacting them after our internet was non-existent yesterday to find out what was happening, I found out we are limited to less than 425MB per 24 hours, which we exceeded quite easily within the first three hours of waking Thursday morning. So we had to eliminate usage for 24 hours to get back into their good graces to get back on line.

Our trip to Indio from Tucson on Wednesday was non-eventful (which is how we like it). Arrived late afternoon at our lot, which we quickly setup then headed over to the restaurant for a prime rib dinner. Conversation was geared toward the opening day of our 2nd annual Indio Invitational, which will start the next afternoon.

The 2nd Annual Indio Invitational brought back all the tournament players from last year - Greg Rolling, Linda Moon and the defending champion, Jim Moon.  Will he keep the title again this year?  The champion after 10 days of play will take home the traveling trophy.

Day one brought a beautiful 80+ degree, minimum winds and bright sunshine.  The game of the day was regular stroke play. 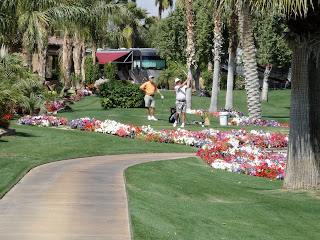 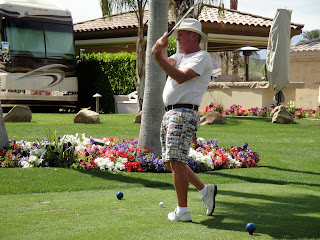 There was first day tension in the air, many choice words describing shots and just plain ole good fun. 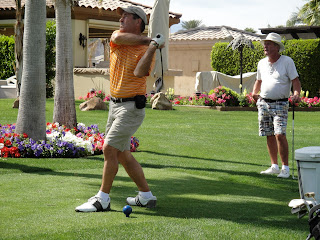 The competition was stiff. After nine holes Greg was at even par and Jim and Linda were tied at +3. 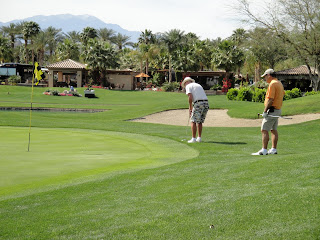 The end of the round found Jim and Greg tied at +7 and Linda at +11. Jim and Greg headed for the next tee box for a sudden death playoff.  Greg prevailed and got the win for the day. 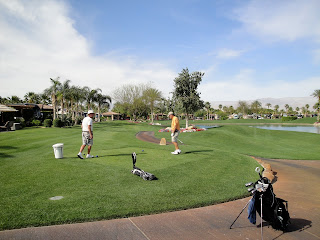 After a hard first day on the course, a round of a good brew was in order.  Congratulations to the winner and to quench a mighty thirst. 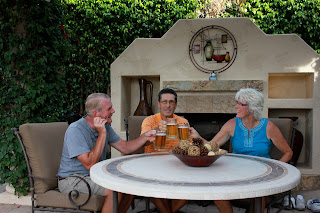 The 2nd day of the Indio Invitational brought excellent weather, with slightly heavier winds, but not too bad.  We played a round of match play, which for the first four holes we were pretty much even. Then on the fifth hole, both Greg and Linda faltered and Jim won the hole. With that momentum, Jim took off and ended up winning 5 holes, Linda 2 holes and Greg came in last with zero.  Better luck next day Greg!

Now we are up to our third day of play and it has determined that Bingo Bango Bongo will be the game of the day. The winds are up presently at 8am with 10-20mph winds forecasted for this afternoon which should bring interesting results. Who will prevail today?
Posted by Moon Ventures at 8:17 AM